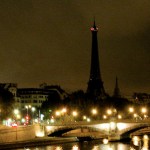 Even after the election of François Hollande as President of France, an energy conservation measure of the previous government will be implemented.

The Sarkozy government wanted to require shops and offices to turn off their unnecessary lights at nights. This will be effective as of July 1, 2013.

All nonresidential buildings will be required to shut off their lights an hour after the last worker leaves or by 1 a.m. each morning. Lights can be turned on again until 7 a.m. or just before they open. Similarly, the lights on building facades will have to be turned off.

In a country famous for its many tourist attractions and whose capital city is known as La Ville Lumière – the city of lights – 41 zones and cities will be exempted. In Paris, many places including the Rue de Rivoli, the Place des Vosges and the Avenue des Champs Elysées won’t be concerned by these measures.

The famous Eiffel tower is already turned off every night after two AM.

250,000 tonnes of carbon dioxide won’t be emitted each year thanks to this simple measure which will save the equivalent of the electricity consumption of 750,000 French households.

The relatively low amount of avoided carbon dioxide emissions can be explained by the fact that French electricity is to date 85 percent low carbon: 75 percent nuclear and more than ten percent renewable energy (mostly hydro)

This will save up to 2 terawatt hours according to the calculations of the French ADEME (French Environment and Energy Management Agency).

As the Environment Minister, Delphine Batho, told the New York Times, this is also a public health issue as ” Artificial lighting can damage sleep patterns (…) and also “cause significant disruptions on ecosystems by changing communication between species, migrations, reproduction cycles or even the prey-predator relationships.”

While these energy savings represents only 0.4 percent of the total electricity consumed in France, this is only a necessary first step. Let’s hope many more will occur rapidly.

To conclude, this should be widespread all around the world as simple steps can have huge consequences.

A previous study has shown that turning off all the computers at the end of work days in only three countries – Germany, the United Kingdom and the United States – could save a massive $4.4 billion per year.

Fascinated by sustainability and cleantech since 2004, Edouard wrote both his Bachelor of Arts' dissertation and Master's thesis on sustainable energy topics. He hasn't stopped writing on these subjects ever since. A French Masters graduate in international management, Edouard has a several experience in Marketing and Communications in Europe and Latin America. Since 2007 Edouard has been selecting for his own blog the latest headlines and best researches on sustainable development, climate change, cleantech and the world energy sector. Nowadays Edouard is pursuing an MBA in Sustainable Business as well as a certificate in Sustainable Energy Solutions at Pinchot University . Edouard has been submitting articles to CleanTechies.com since June 2009, mostly on French and European policies. Don't hesitate to contact him as he is always interested in discussing cleantech with new people.

Roadmap to a Hydrogen Economy?

[…] Most of this ambition remained that, just ambition (Granted, there were a few successes on energy use and […]