WWF: European Union Can Halve Its Emissions By 2030 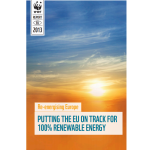 According to a brand new study carried out by consultancy Ecofys and commissioned by the WWF, the European Union can halve its greenhouse gas emissions by 2030.

We have seen time and again that the European Union has been a leader in the fight against climate change when it unveiled its now famous 20-20-20 by 20 strategy. We also have seen that the EU could go further and that 30 percent cuts are achievable by 2020 as its Emissions keep decreasing.

What the EU currently lacks is a vision for 2020 and a plan for further cuts afterwards. There is indeed nothing official on the much needed energy transition to be done at a European level.

Now the WWF and Ecofys demonstrates that – with the right incentives and policies – by 2030 the 27 members of the EU could get 40 percent of its energy from renewables and cut their energy use by 38 percent (compared to a business as usual projection).

The report is a reminder that achieving 100 percent renewables across the economy by 2050 is absolutely feasible.

Energy efficiency, as you can imagine, would play an important role in this endeavor. Here is an overview of what could be done.

The methods involved in the reductions would change from sector to sector. Transport emissions would be cut by fuel economy measures, improved air traffic management, and greater vehicle electrification and use of hybrids.

In industry, a 60 to 70 percent reduction in the intensity levels on 2000 levels would be achieved through increased recycling, stringent and ongoing ‘best available technology’ guidelines and ambitious plant refurbishments.

By contrast, with buildings, a 2.5 percent annual retrofit is proposed, along with increased heat recovery, insulation and ventilation systems, heat pumps, solar thermal systems and local renewable solutions where possible.

Let’s hope the European Union will take advantage of this report and many others to provide an ambitious energy and climate project for 2030 and beyond.

Fascinated by sustainability and cleantech since 2004, Edouard wrote both his Bachelor of Arts' dissertation and Master's thesis on sustainable energy topics. He hasn't stopped writing on these subjects ever since. A French Masters graduate in international management, Edouard has a several experience in Marketing and Communications in Europe and Latin America. Since 2007 Edouard has been selecting for his own blog the latest headlines and best researches on sustainable development, climate change, cleantech and the world energy sector. Nowadays Edouard is pursuing an MBA in Sustainable Business as well as a certificate in Sustainable Energy Solutions at Pinchot University . Edouard has been submitting articles to CleanTechies.com since June 2009, mostly on French and European policies. Don't hesitate to contact him as he is always interested in discussing cleantech with new people.

Energy Efficiency in the Supply Chain 101